• Lower energy use: over 50% saving
• Less water nutrients demand
• Safer at any distance
• Allow growers to enjoy much more control over their plant morphology

• Photons: Photons are light particles that are measured in mol. A mol of photons is equivalent to 6.022 x 10^23 number of photons. 1 mol = 1,000,000 umol.
• Photoperiod: The period of time during which natural or artificial light is available to promote photosynthesis in plant life each day.
• Photosynthetic Photon Flux (PPF): Measured in the unit of umol/s, relating 400 to 700 nm wavelength.
• Photosynthetic Photon Flux Density (PPFD), also called Photosynthetic Active Radiation (PAR): Measured in units of umol/s/m2, relating to 400 to 700nm wavelength.
• Day Light Integral (DLI): Measured in mol/m2/d, it is a cumulative measurement of the total photons that reach the target during the photoperiod.
DLI = PPFD x number of hours of light on per day x 0.0036
• Energy Efficiency: Measured in mol/J. It is defined as the PPF per unit electrical power (W) consumed, and given in the units of umol/J.

• DLI (artificial light) = DLI (target) – DLI (natural light)
• Typically 35-50% loss of DLI in a greenhouse
• The average DLI received outdoors ranges roughly from 5 to 60
• Plants require full shade: 4-6 mol/m2d or even less
• Plants require full sun: 18 mol/m2d or even more
• Most shade intolerant plants: 10-12 mol/m2d
• For example: 12 mol/m2d need 16 hours of 208 PPFD (PAR)
• Red is more efficient for the plants to grow, but the LED light should also contain some amount of blue light. Green, far red, and near UV spectral components may need to be added for optimal plant development.
• For regularating flowering, low R and FR light is needed. Typical R to FR ratio is 1:1 to 1:2 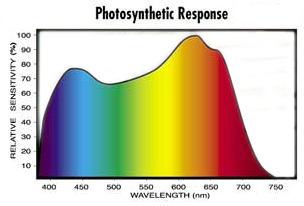 • As shown in the figure above, the spectrum that can be used by a plant for its photosyntehsis is between 400-700nm. For green plants the light absorption peaks that are most important are as follows:
1. Chlorophyll-a: 430nm/662nm
2. Chlorophyll-b: 453nm/642nm
3. Carotenoids: 449nm/475nm
• The number of photons from each unit of light energy carries is directly proportional to its wavelength. So the red is almost 1.5 times more efficient than the blue.
• The blue spectral region is also important for suppression of stem elongation. Less than 10% of blye may lead to developmental problems in some plants.
• Near UV light is known to affect the biosynthesis of compounds, such as the compounds responsible for the flavor of certain fruits. 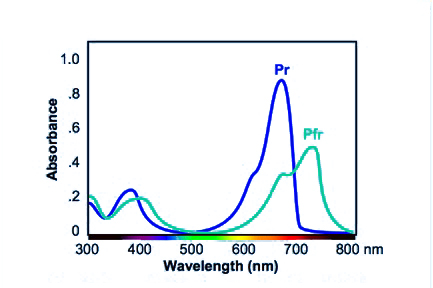 • Comparing to Photosynthesis, Photomorphogenesis requires low light range, the operating time needed for photoperiod control can be much shorter.
• Phytochrome is a blue protein pigment which exists in two forms – a red light absorbing form (Pr) and a far red absorbing form (Pfr). The Pr and Prf forms convert into one another upon absorbing the corresponding light. The ratio of each form depends on the ratio of R to FR light in the spectrum, also depends on the dark period because the Pfr form will slowly revert spontaneously into the Pr form during dark periods.